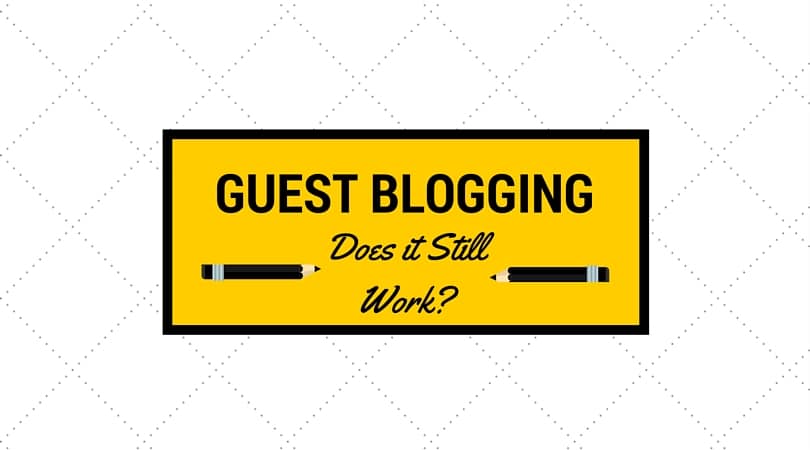 Guest Blogging: Does It Still Work?

Lately, the world of Search Engine Optimization has been abuzz with the war over guest blogging. If you are a seasoned player in the field, chances are you already know what the humdrum is all about. But if you are a new to blogging, content management, link building, and all things SEO, here’s your primer on the guest blogging conundrum.

Simply put, when you guest blog, you write a post to be published on a blog or website other than your own. This may work in two ways – you may be invited by a blogger to write a post for his or her blog, or you may successfully pitch a guest post to a potential host blogger.

Why, then, would you do it? Sure, you may do a friend a favor and write a guest post for his or her blog, but why would you actually pitch a guest post to someone? Well, you do because guest blogging pays in ways other than immediate financial remuneration.

When you publish a post on somebody else’s blog or website, you gain exposure to a new audience – your host’s. If they like your post, chances are they will want to visit your blog to read more of your work, earning you more traffic and more followers. In fact, guest blogging can contribute immensely to brand building. Consider the following examples:

The leading business research company, Forrester Research, makes strategic use of guest blogging at major blogs to share – and publicize – their team’s expertise. For instance, their vice president and research director guest posts on brand loyalty, their consumer product strategy professional leader writes on the future of digital music, and their principle analyst guest blogs on new domain registry options – all contributing to the image of the company.

Intel’s Ekaterina Walter contributes guest posts to giant sites like Social Media Examiner, Mashable, Fast Company, The Next Web, etc. Through effective and interactive guest blogging, Walter has become a celebrity in the social media circles – bringing credibility to both her and the company.

So, if guest blogging is so beneficial, what really is the controversy around the practice?

Matt Cutts, who leads the Webspam team at Google, has long been expressing the monolith’s position on guest blogging. Through videos posted on the official Google Webmasters’ YouTube channel, Cutts has been warning action against low quality or “spammy” guest posts. On 20th January, 2014, Cutts posted on his personal blog lambasting guest blogging as a link building tactic:

Okay, I’m calling it: if you’re using guest blogging as a way to gain links in 2014, you should probably stop. Why? Because over time it’s become a more and more spammy practice, and if you’re doing a lot of guest blogging then you’re hanging out with really bad company. Back in the day, guest blogging used to be a respectable thing, much like getting a coveted, respected author to write the introduction of your book. It’s not that way any more… Stick a fork in it: guest blogging is done; it’s just gotten too spammy.

Matt Cutts’ post may have appeared on his personal blog, but the SEO world knew better than to dismiss it as a random guy’s rant. Surely enough, on 19th March, 2014, Matt Cutts’ announced – on his Twitter – that Google had taken action against a “large guest blog network” earlier that day. Although the tweet did not mention names, it was speculated that penalized network was MyBlogGuest. Ann Smarty, the owner of the service, later confirmed the speculation through her own tweets.

Indeed, the last 25 Google Panda updates were aimed at penalizing low-quality sites and sites with spam content – at the same time allowing high-quality sites to rise through the ranking. Through the Google Penguin penalty, the Search Engine targets posts with exact-match anchor text, overuse of exact-match domains, keyword stuffing in internal or outbound links, and low-quality article marketing.

So, should you really “stick a fork” in guest blogging? Is it really, as Matt Cutts declared, a dead practice?

Matt Cutts’ post fell on the SEO world like a bomb. While it has indeed served to elevate quality-consciousness among guest-blogging circles, it has also had an undesirable scaremongering effect on new entrants to the guest blogging world. As such, between its first appearance and now, his article has been cited, criticized, and scrutinized at various levels.

Copyblogger is a major site that accepts guest posts. In the wake of Cutts’ call to “stick a fork in guest blogging”, the site attempted to lay off the fears and apprehensions of its guest authors. It proclaimed that contrary to what Matt Cutts may claim, guest blogging was not done.

Google fails as a search engine if it penalizing sites that deliver quality content just because that content happens to be in the form of a guest post. And we all fail as publishers if we follow a strategy of chasing hypothetical algorithm changes.

A Search Engine Journal post criticizes Matt Cutts not so much for his stance against guest blogging as his way of communicating it, which, according to the author, was “at best careless and at worst irresponsible.”

The article goes on to explain that SEO is not the only way guest blogging can help your business. Because Cutts’ audience was not limited to digital marketers or SEO professionals, the use of broad language like “So stick a fork in it: guest blogging is done; it’s just gotten too spammy” is dangerous, and may serve to steer small business owners away from a valid technique for promoting their business because they may see it as lumped together with other spammy practices.

It is worthwhile pointing out that Matt Cutts added a post-script to his article explaining that he was only declaring  guest blogging dead as an SEO tactic – which suggests that guest blogging for purposes other than SEO (such as building thought leadership and increasing awareness) is permissible. However, Neil Patel (co-founder of Crazy Egg, Hello Bar, and KISSmetrics) argues that guest posting can still be a legitimate SEO tactic, albeit in a different way.

So, then, if guest blogging is still a functional link-building tactic, how do you – as a freelance blogger – go about it?

How to Guest Blog and Ditch the Penalty

Guest blogging can still serve as an effective means of link-building for you. All you need to do is pay close attention to a few basics:

It has long been a common practice for guest bloggers to write their guest post and insert exact-match anchor texts therein to link it to a post on their own sites (or whatever else may be important to them). For instance, if they wanted to promote a local Asian stir-fry chain in LA through their post, they would use the anchor “Asian stir-fry LA” – simply because this is exactly what people will most likely type in when searching for such a place in LA on Google.

The search engine would then read this anchor and form the impression that the site being linked to is obviously important in the “Asian stir-fry LA” space, so the site should rank for the phrase. However, this practice which was so widely used erstwhile will now put you at risk of being penalized. Instead, try using keywords in close proximity of your link without making them your anchor text. For your anchors, use general terms (“click here”, “article”, etc.), single words (“dealers”, “services”), or even naked URLS.

Placing links in your guest-blogger bio box only makes it easier for Google to identify and devalue them. Place your links in the body of your post instead. Of course, you should only place links to highly relevant sites and/or quality articles and it should all be aimed towards giving your audience a better web experience.

It is probably not the best idea to link all your guest posts to your G+ profile. If you have Google Authorship on every guest post you have ever written, all Google needs to do to devalue them is simply check your profile data and crawl all posts linked from there.

Guest blogging – if done right – still remains a great way to gain exposure and drive traffic, and a functional SEO tactic. An important question you may want to ask is: since when did a Search Engine get to decide if an age-old internet practice should be forked or is still functional? The truth is, it doesn’t.

As a freelance blogger, if you feel like Google is pushing you around, you can do whatever you want. However, remember that Google may not be the only search engine, but it is definitely the largest and most widely used. So if you ignore their guidelines, you cannot expect good results when your potential readers ‘Google it’.

11 Digital Marketing Trends You Can No Longer Ignore in 2020

The State Of Email Marketing in 2020

Enter your email address below to get my exclusive and best content on making money and living a better life!

Get my Productivity Hacking Toolkit

Enter your email below to get my productivity toolkit, FREE!